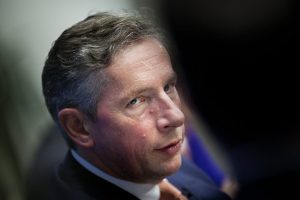 Shares of Arconic Inc rose nearly 10 points on Monday to reach $28.44 in early trading after chief executive Klaus Kleinfeld resigned from the US-based specialty metals maker, amid great attempts by the Elliott Management hedge fund to replace the company’s board of directors and other top executives. In a statement regarding his departure, the company noted the consent was mutual, though, Kleinfeld has sent a letter to a senior officer on the board without actually consulting anyone.

The company added in response that the move was definitely not in response to the firm’s activist campaign or in response to missing any financial targets. In a statement, the company said,
“It is Elliott Management’s decision whether to continue to burden Arconic and its shareholders with its highly disruptive and distracting proxy fight, or to support Arconic in facilitating an effective C.E.O. search and a strong transition.”

Elliott Management goes on to say, “It is simply the latest debacle in a pattern of conduct in which the board has repeatedly excused, endorsed and participated in Dr. Kleinfeld’s poor leadership and attempts to entrench himself and his allies on the board.”

As a matter of fact, Elliott Management stated that Kleinfeld’s letter could be “read as a threat to intimidate or extort a senior officer of Elliott Management based on completely false insinuations,” immediately informing Arconic of the letter upon first receipt.

Kleinfeld will now be replaced by David P. Hess as chief executive, though on an interim basis. A former top executive with United Technologies, Hess had joined the board at Arconic earlier this year. In the interim, his role as chairman will then by filled by lead director Patricia Russo.

Previously, Arconic had said that electing Elliott’s directors could cost upwards of $500 million to shareholders, under the specific company rules regarding changes in governance in corporate entities within an employee trust. Still, the hedge fund also has its own proposal for a candidate in the chief executive position and was explicitly unmoved by the interim selections. Elliott Management had originally campaigned for former CEO of aircraft parts supplier Spirit AeroSystems Holdings, Inc to replace Kleinfeld.

As such, shares in Arconic settled significantly, though still up 3 percent on the day. Shares closed the market at $26.69.