Scientists In Germany Are Testing An Artificial Sun 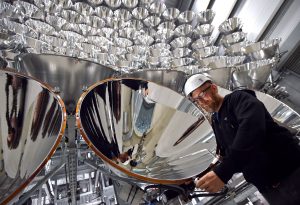 Scientists at the German Aerospace Center (DLR), in Jülich, Germany have created the world’s largest artificial sun. According to researchers at the center, this experiment aims to find new—and creative—ways to make solar fuels. This includes, of course, hydrogen fuels, which is likely to be quite an important renewable energy source in the near (and distant) future.

German Aerospace Center director of the Institute for Solar Research, Bernhard Hoffschmidt explains, “The test aims to find new ways to create hydrogen to fuel vehicles such as cars and planes. We’re essentially bringing the sun to the Earth, by re-creating its radiation in a lab.”

This “sun” consists of roughly 150 high-performance Xenon short-arc lamps which have been assembled into a three-story research facility as part of the Synlight project. The goal, of course, is to somehow simulate enough natural solar radiation in order to analyze new processes for extracting, making, and using hydrogen fuels. The 350 kw lamp array is estimated to be 10,000 more intense than natural light from the sun; of course, the sun generates limitless energy.
Hoffschmidt details, “We orientate all lamps to focus on one point, which can generate temperatures of over 3,000 degrees Celsius.”

The goal of the Synlight project is, basically, fission: splitting water molecules into its respective oxygen and hydrogen components using the solar power. Ironically hydrogen is the most abundant element in the universe, but is not all that easy to find (on its own) here on earth.

Hoffschmidt continues, “The hydrogen created can then be used to power airplanes and cars (with) carbon-dioxide-free fuel.”
Obviously, this project aims to address the increasing pressure around the globe to reduce carbon dioxide emissions (from traditional, fossil fuels) in hopes to supplement power generated from other renewable sources, like wind and solar.

The only problem—at least, for now—is that Synlight consumes a massive amount of energy. And it cost $3.8 million to build it. Hoffschmidt adds: “In four hours the system uses about as much electricity as a four-person household in a year. Our goal is to eventually use actual sunlight to make hydrogen, rather than artificial light.” Indeed, he says they have quite a long way to go before it become a practical application. He notes, “I think commercial use will only really be possible when societies and governments realize that we cannot burn any more fossil fuels.”