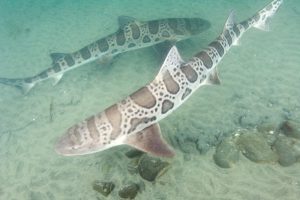 Life finds a way. The singularly iconic phrase from the original Jurassic Park movie is both trite and true in terms of unexpected evolution, but there is evidence of this everywhere. Today, the evidence comes in the form of a female leopard shark who has given birth despite the fact that she has been without a mate for the past four years.

Her name is Leonie. She lives at the Reef HQ aquarium in Townsville, Queensland. At the aquarium she successfully bore children with her mate between 1999 and 2012 until the staff separated the pair to slow down breeding. Two years after the separation, however, the leopard shark began laying eggs with embryos inside.

This means that, somehow, they have been fertilized.

“We thought she could be storing sperm,” explains University of Queensland biologist Christine Dudgeon; after all, this species has been known to carry sperm for up to four years. “But,” she continues, “when we tested the pups and the possible parent sharks using DNA fingerprinting, we found they only had cells from Leonie.”

Dudgeon goes on to say, that obviously sperm storage was one possible explanation. There is solid, documented evidence of female sharks storing their mate’s sperm for long periods of time. However, the other possible explanation was parthenogenesis, she explains. This is asexual reproduction and it is something they had only seen in maybe a half dozen sharks—but none of those examples had every previously mated.

Indeed, Reef HQ senior aquarist Hamish Tristram notes, “It was definitely a surprise. She had been mating successfully for several years, and there was nothing much published about such large animals switching reproductive strategy so quickly.”

Tristam adds that they still don’t really know how this happened, but poses a few theories. He comments, “One theory is that in the wild, if for some reason males can’t have contact with the females for one breeding season, they can keep their lineage going for one or two seasons [through asexual reproduction], until they can reproduce the traditional way.”

However, retorts Dudgeon, this reproductive method is not one that Mother Nature would prefer. It greatly reduces genetic diversity. “Long term,” she says,
“they need to diversify to help them adapt to their environment.”