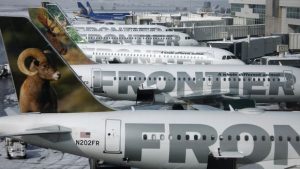 Long lines at crowded airports are common in December, as busy working families head across the country to spend the holiday season with loved ones. But things at Denver International Airport got a little out of hand this week when Frontier Airlines cancelled several flights, leaving hundreds of passengers stranded with lost luggage in an episode that the pilots union has described as a “meltdown.”

Now, while grounding and canceling flights can also be somewhat common during the snowy season—particularly in hard-hit places, like Denver—passengers continue to vent about lost luggage and lack of communication. And, more importantly a lack of compassion.

For one, passengers argue that flights would show an “on-time” status on the call board; at least, at the ticketing counter. It was only after finally getting through extremely hectic security gates that they would learn otherwise. Also, some passengers argued that they would now not be able to make it home for Christmas with their families. And, in what will turn out to be the biggest insult of all if holds true, customers complain that Frontier has not been offering the customary concessions like meals and hotel rooms to help compensate such losses.

Frontier Airlines spokespman Jim Faulkner tries to explain, “We had large numbers of (pilots and flight attendants) who were stranded outside of Denver over the weekend, and many were scheduled to operate flights from Denver to somewhere else. In some cases, we had a plane but no crew to fly it because of the weather.”
He goes on to say, “Because our crews can only legally fly for a certain amount of time, many of them ‘timed out’ and were unable to continue on a trip.”

Passengers, of course, have grown weary of the excuses. It seems they know that this is about more than just inclement weather. Joy Sanders, for example, argues, “It’s not weather anymore. They’re saying it’s a ripple effect from weather — it’s not weather. They’re not handling their business right or their flights right. They know if they don’t have a co-pilot ahead of time they should just reschedule the flight. Or done more flights to try to catch up on this.”

Similarly, passenger Jayne Hellenberg comments, “I’ve heard it’s not about weather it’s about a walkout.” Her flight to Cabo San Lucas, Mexico, was canceled on Sunday. She continues, “It’s our 25th anniversary. We’ve been planning this for a year. It’s kind of a bummer.”

Indeed, Capt Brian Ketchum chimes in: “While weather conditions made operations for all airlines at Denver International Airport more challenging last weekend, this most recent meltdown by Frontier Airlines is due to the same executive mismanagement and misplaced focus on cost-cutting that has placed Frontier near the very bottom of the industry in operational performance and customer satisfaction.”