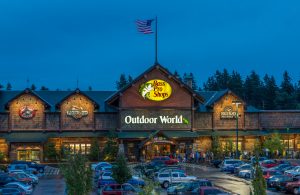 Bass Pro Shops announced, on Monday, they have reached an agreement with Cabela to acquire the competitor. The private company deal has been valued at $5.5 billion, a conclusion to roughly 10 months of negotiations since Sidney, Nebraska-based Cabla essentially put itself up for sale upon the urging of Elliot Management. The hedge fund had actually declared the slipping hunting-and-fishing retailer to be undervalued and called for them to consider either a reorganization or a flat out sale.

For their part in the sale, the privately-held Bass Pro Shops will pay $65.50 per share, in cash, for Cabela’s. This represents a premium of 19.2 percent over its closing price, from Friday. Almost immediately, Cabela’s shares rose nearly 15 percent, to $62.99, in pre-market trading, on Monday.
While shareholders appear to be responding positively it is still unclear how the sale will effect actual stores. For example, it was not immediately clear if the acquisition would result in the closure of any physical stores. However, both companies invovled with the merger said that the Springfield, MO-based Bass Pro Shops would “celebrate and grow” the existing Cabela brand.

That “Cabela brand,” of course, is large-format destination stores. These are more than just retail outlets: these are experiences that showcase their products in a more realistic setting. However, this format has struggled, lately, against smaller, more flexible competitors and, of course, online retailers that can deliver the same products (albet, sans “destination experience”) at discount prices. Indeed, sales at existing Cabla stores—open at least one year—fell 1.3 percent in just the first half of this year, compared to the same period last year.

In addition, though, the number of purchases registered through Cabela stores fell 8.1 percent during the same period. This, the company says, reflects a notable reduction in foot traffic; a result in customers buying less clothing and footwear through retail outlets. Thankfully, for the company, though, hunting sales increased and, overall, the average revenue per transaction has increased by more than 8 percent.

Bass Pro Shops founder and CEO John Morris, notes, “Today’s announcement marks an exceptional opportunity to bring together three special companies with an abiding love for the outdoors and a passion for serving sportsmen and sportswomen….We look forward to continuing to celebrate and grow the Cabela’s brand alongside Bass Pro Shops and White River as one unified outdoor family.”